From Rogač, the oldest coastal town on the island of Šolta, you will sail towards the westernmost part of the island to visit the town of Maslinica. The entrance into the bay is hidden behind six islets. The biggest islet, 70 m high Stipanska, is the furthest to the west. It is covered in thick macchia, which hides the remains of an early Christian 5th century basilica and the remains of a Benedictine monastery. In Maslinica, there are old traditional houses as well as new apartments for summer vacations. On the forested south coast, there is a Baroque castle, newly rebuilt and turned into a hotel.

Under the castle, there is a newly built Martinis Marchi Marina where you can leave your boat. In the close vicinity of Maslinica there is a bay called Šešula. It provides a good shelter during a strong mistral (a dry cold northerly wind) or tramontana (a cold wind from the northeast or north). If the winds are unfavorable, you can berth in Šešula, but be careful and drop your anchor chain deep enough because the depth of the bay is considerable. 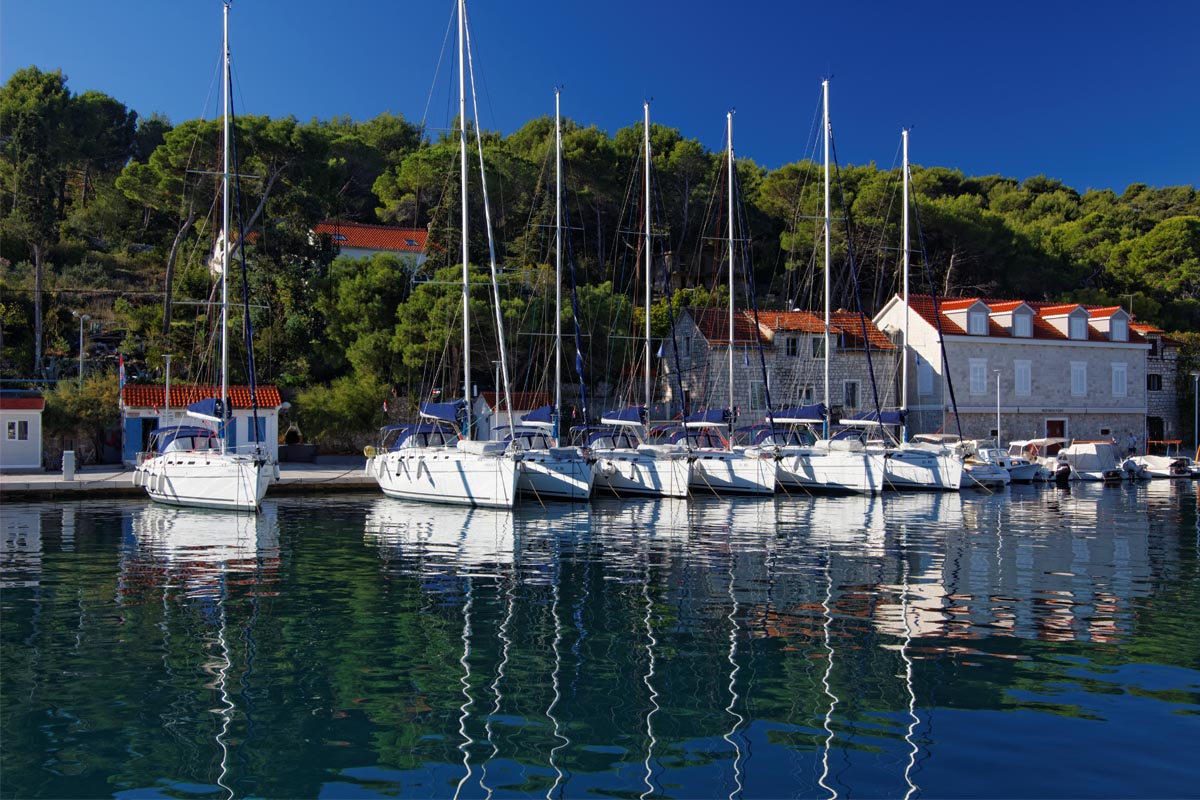 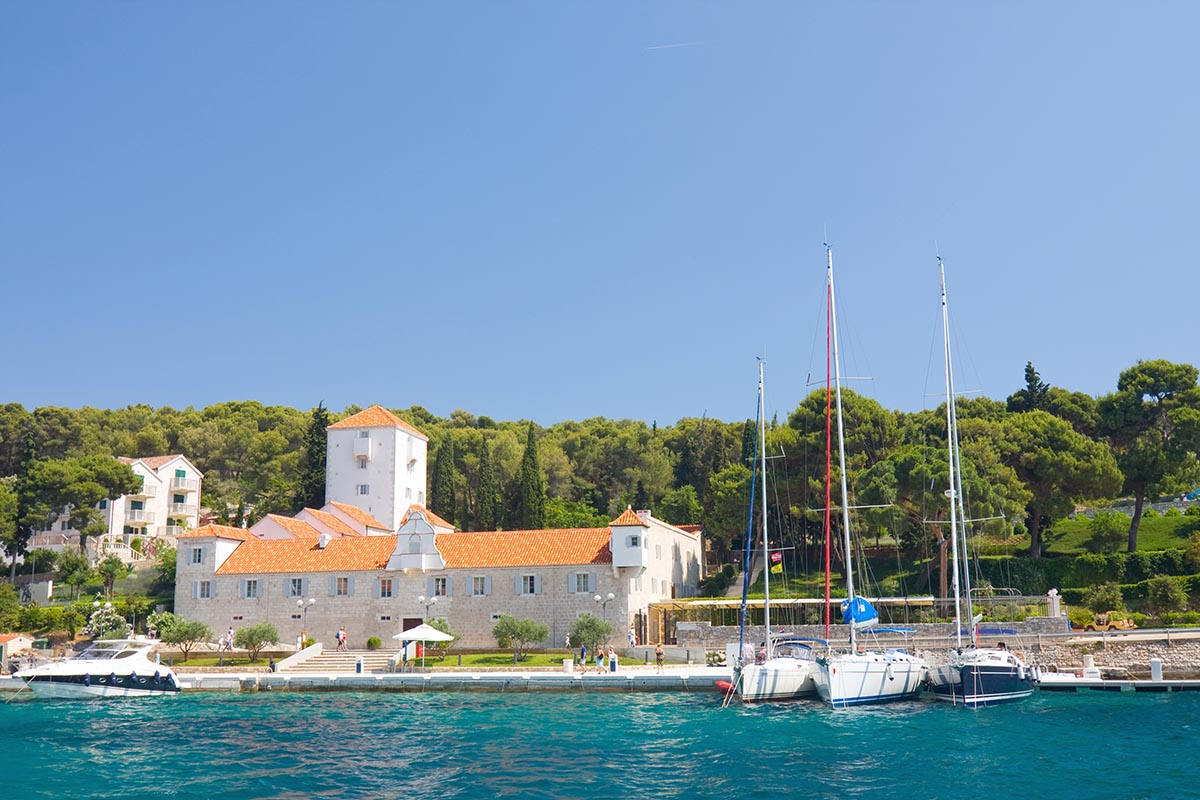 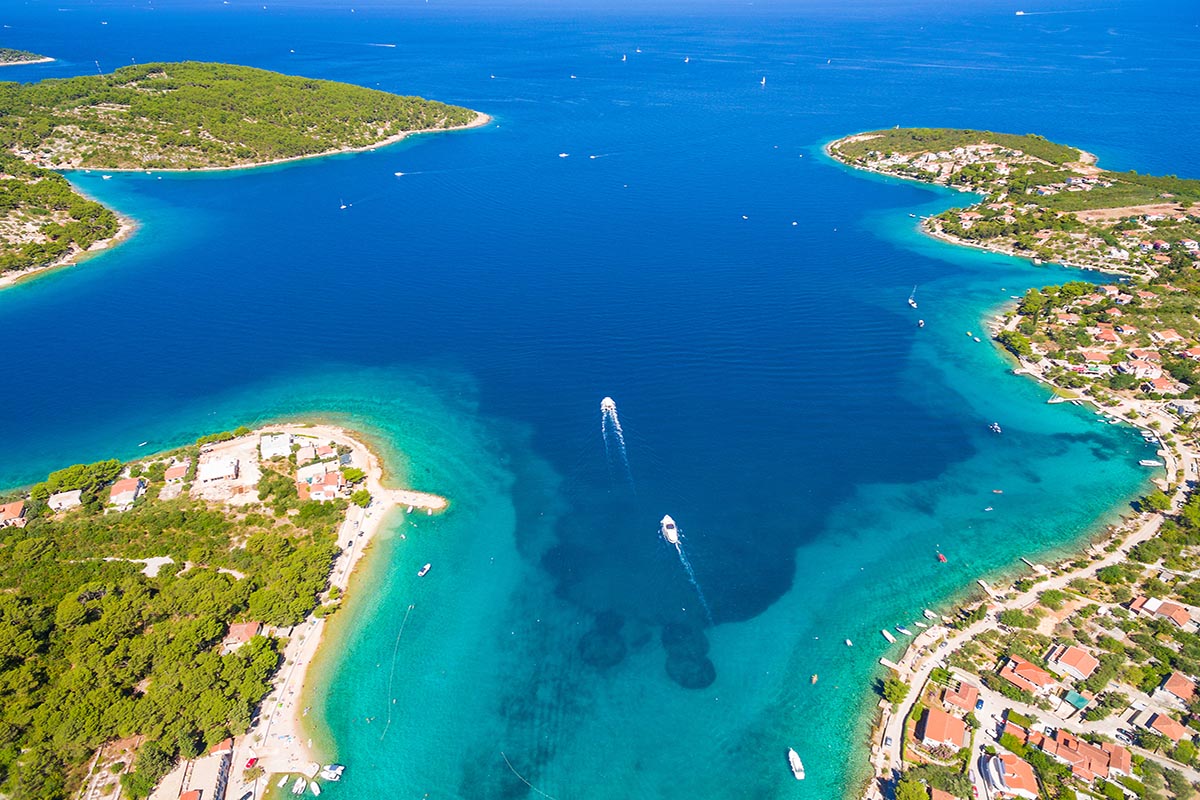 The next destination are the islands of the Šibenik archipelago. The first islands you will reach are Zlarin and Prvić. Visit both of those islands and, depending on the winds, berth in the bays which give you the best protection.

Zlarin’s harbor is an ideal shelter during jugo, but also during bura, which are local names for winds that blow from the south and the north, respectively. Should jugo start to blow, spend your night in Zlarin because Prvić does not provide much safety from that wind. Zlarin’s harbor is dominated by a 140 m long Austro-Hungarian stone quay, which used to serve for berthing of military ships. Along the town’s waterfront, you can see small boats of the locals. There are also several small 18th century churches and a few cottages from the same period in the town. Bathing resorts and sylvan shores are situated on the southeast of the island. The beautiful Magarna Bay is protected from the winds that blow from the 3rd and 4th quadrant, so you can spend your night there as well. Here, the Adriatic sponge, which is highly appreciated on the market, is taken out of the sea in a traditional manner. If you are a coral lover, you have come to the right place. The Adriatic fiery red corals are fished by people from Zlarin and are sold in jewelery stores along the Adriatic coast.

The island of Prvić is a natural extension of Zlarin which is proven by many undersea shallows and reefs. Prvić was inhabited since the early Middle Ages, and it is suggested that the name Prvić originates from the word Prvica or Prvina, which was the name for an ancient god of spring. Prvić is covered in the Mediterranean macchia, vineyards and olive groves, and has quiet picturesque bays. It is an ideal spot for people who love peaceful islands. There are two smaller towns on the island: Prvić Luka on the southeast and Šepurine on the southwest. If you want a trip around the island, all that you need is comfortable shoes. There are many trails on the island, and exploring it will feel like a small adventure. From cultural sights, you can see the Church and Monastery of The Lady of Mercy situated in Prvić Luka. Inside of the church is the tomb of Faust Vrančić, a prominent Croatian writer, linguist, inventor and bishop, who lived at the end of the 16th century. In the town of Šepurine, there is a church of St. Jelena with a richly decorated baroque altar. On the north side of the island, there is a baroque summer house with a large art collection owned by the Draganić-Vrančić family. 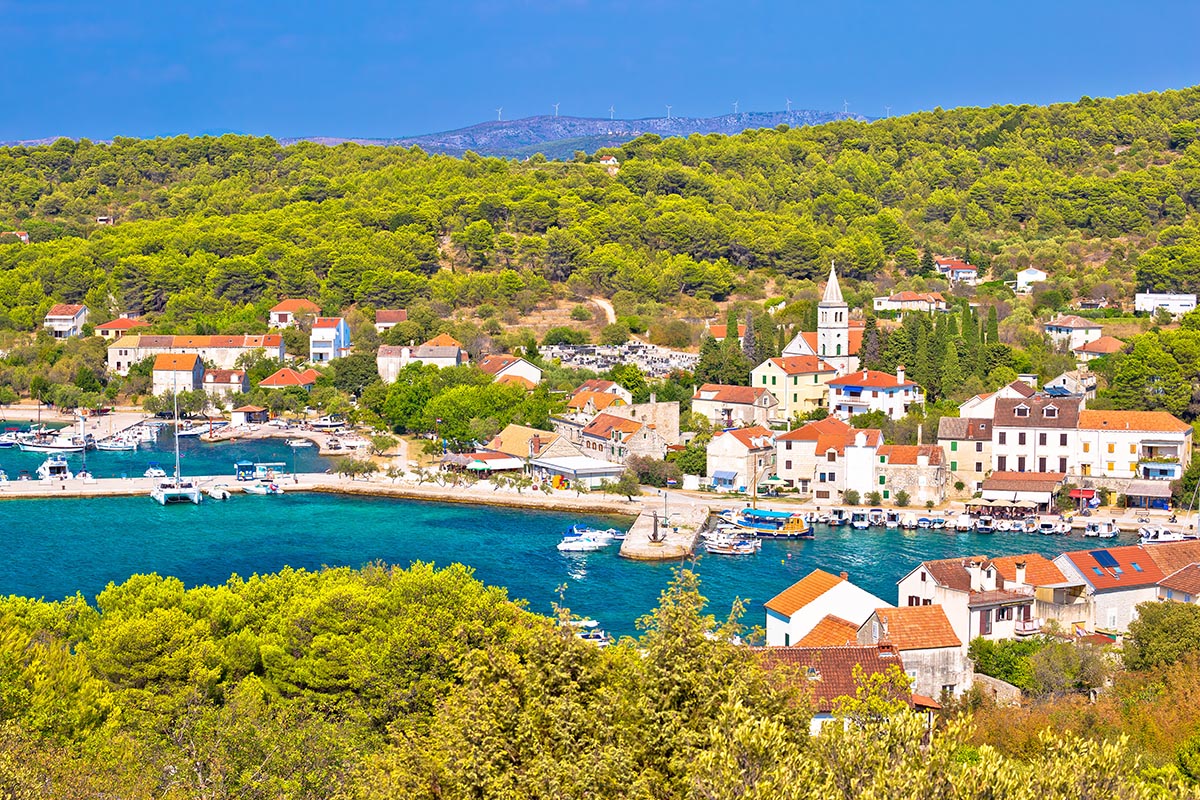 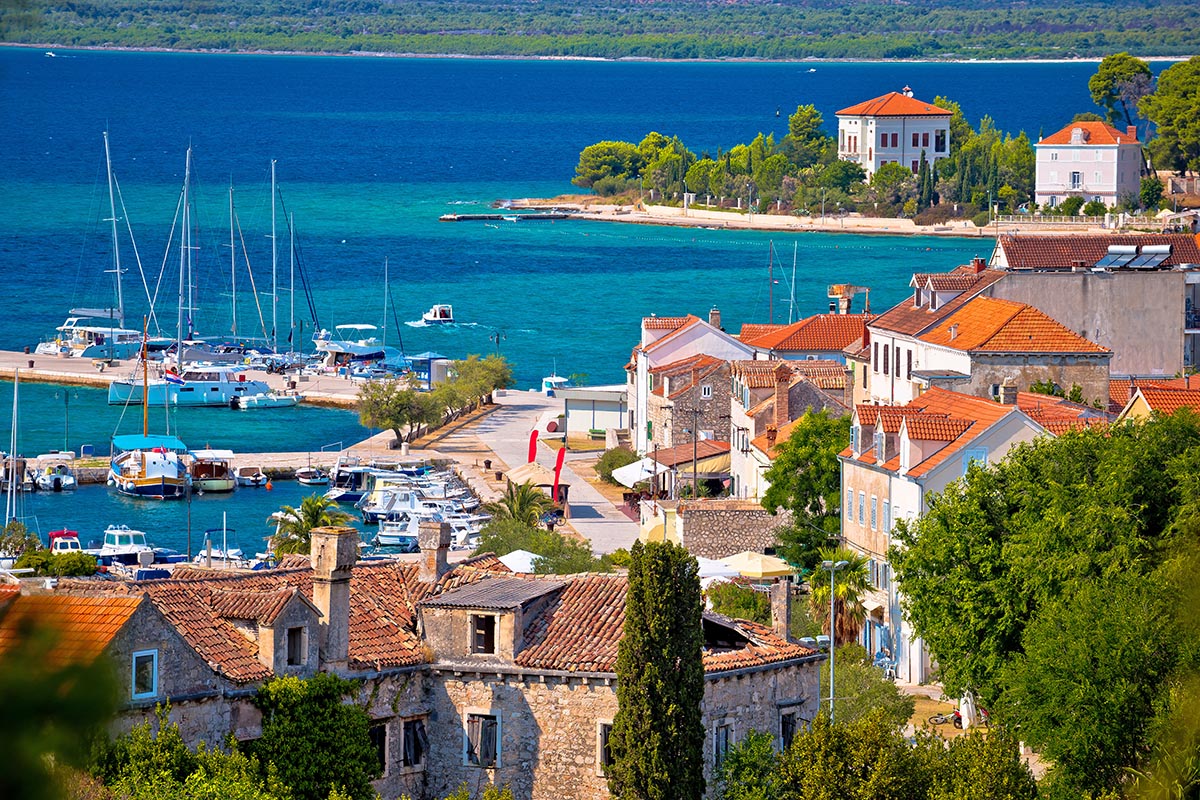 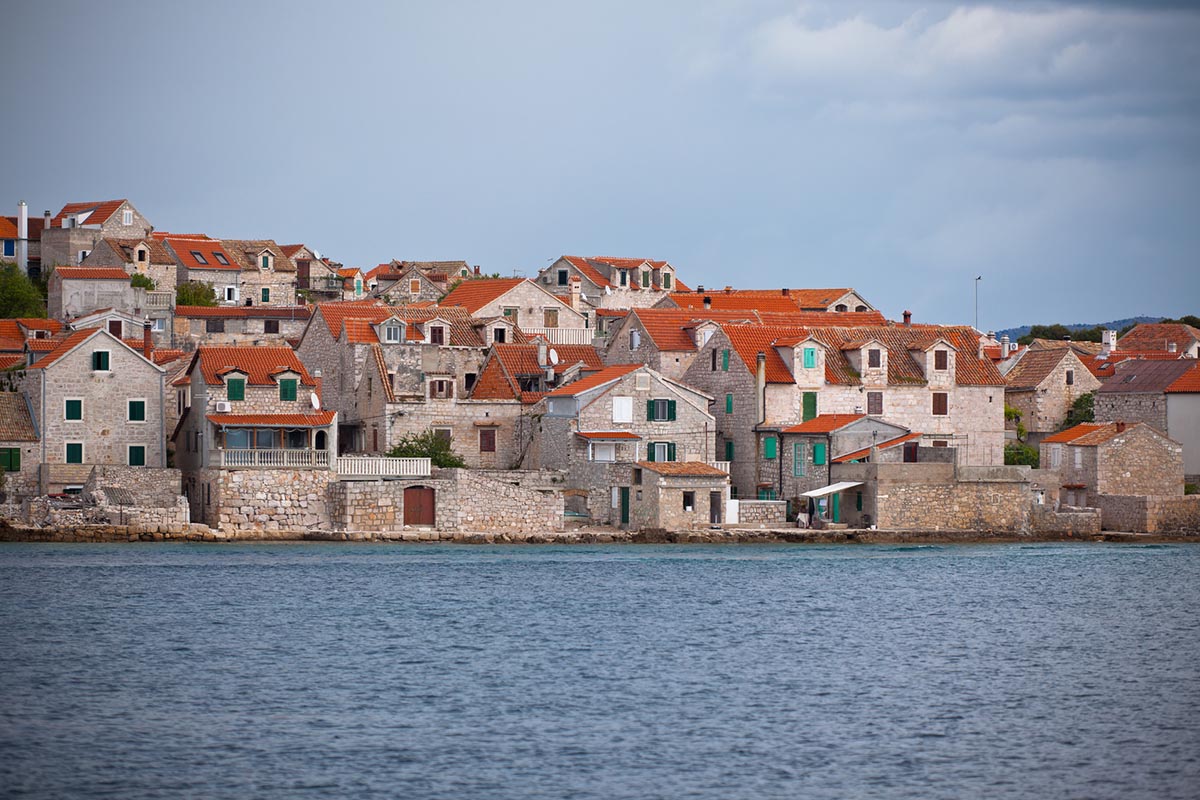 Sail on towards Skradin. Coming to Skradin by waterway, through the canyon of the river Krka, is a challenge and a unique experience that no sailor would miss out on. This Dalmatian town has a rich history: it is old enough to impress you with its antiquity and modern enough to provide you with everything you may need. Its gastronomic offer and the famous white wine Debit will please even the most demanding guests. In the close vicinity, there is a bathing area and a playground for children and people who wish to play sports. Those who like more private beaches can find their spot outside the town and should not be surprised when swans come for a visit.

Skradin is a starting point of all excursions of the area because of its vicinity to the Krka National Park. From here, tourist boats will take you to the entrance of the park and to one of the most beautiful waterfalls – Skradinski buk. You are bound to enjoy the green color of the water and vegetation, as well as the pleasant murmur of the waterfall and the still active mills. On the Visovac Lake, there is an island with a white Franciscan monastery. Monks who pray and work there are the keepers of old books and art collections. 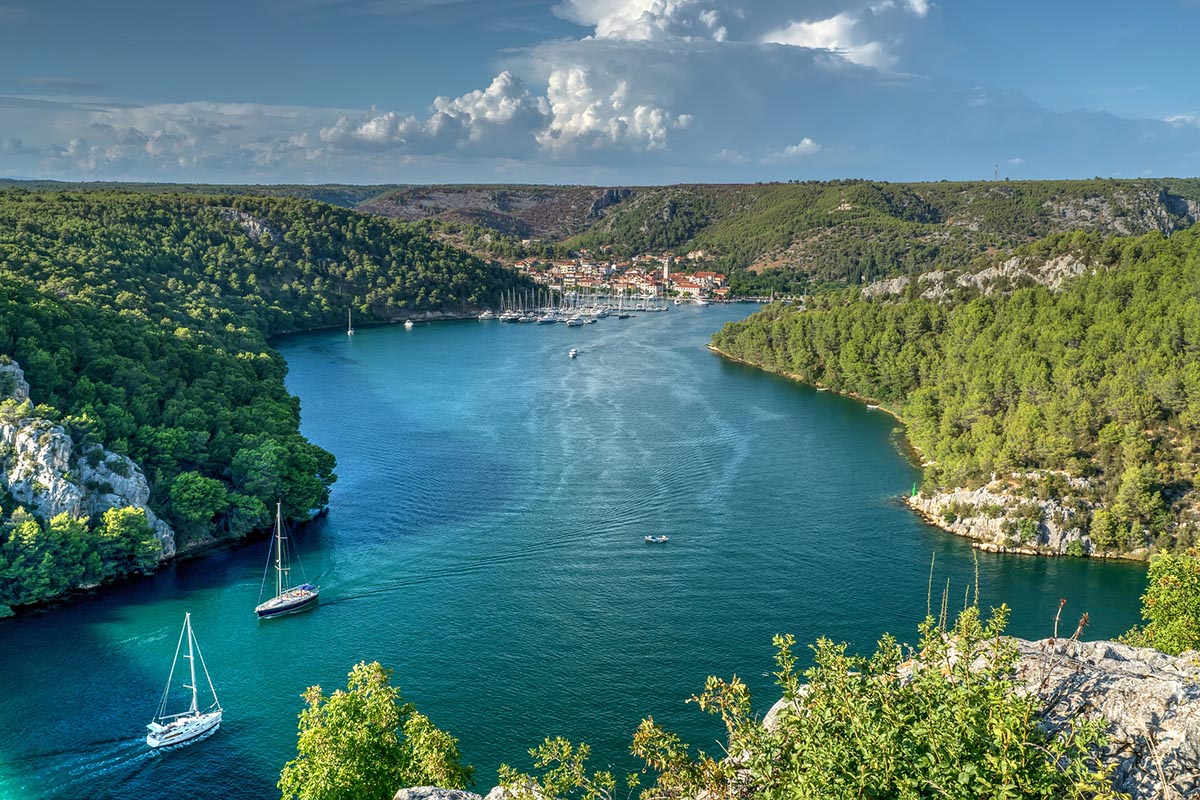 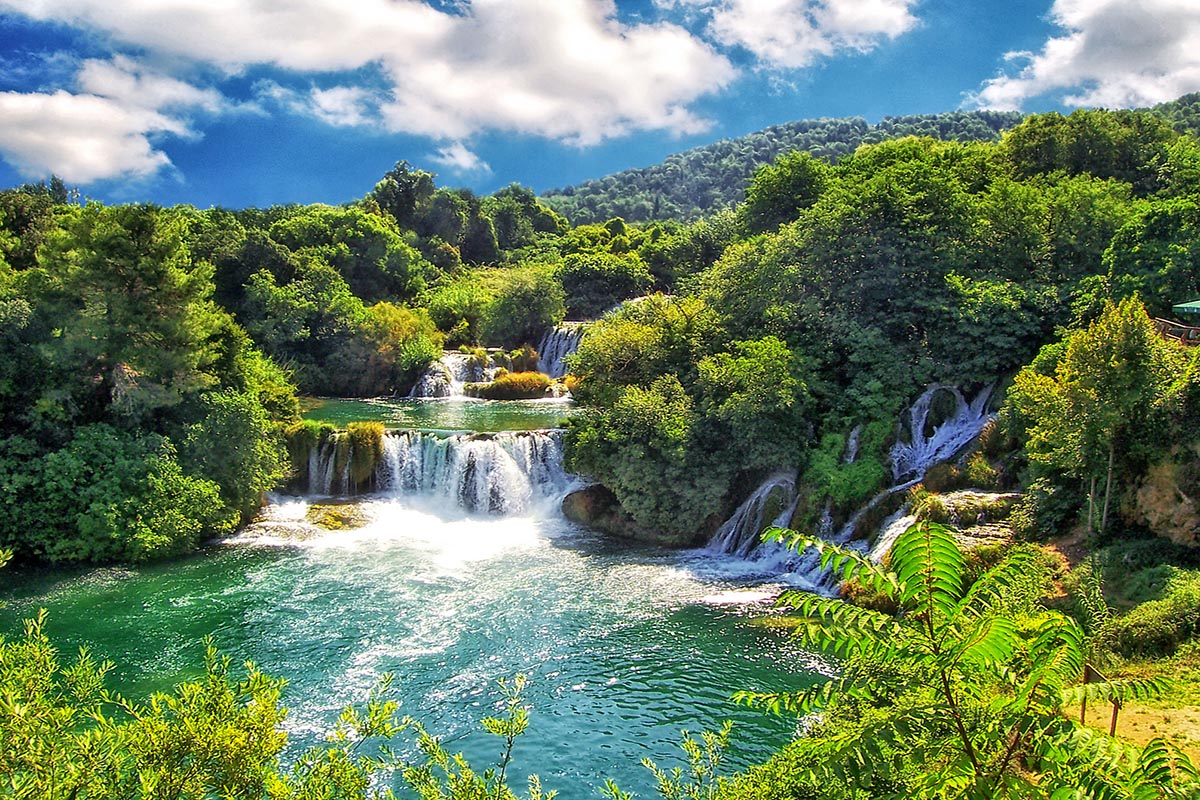 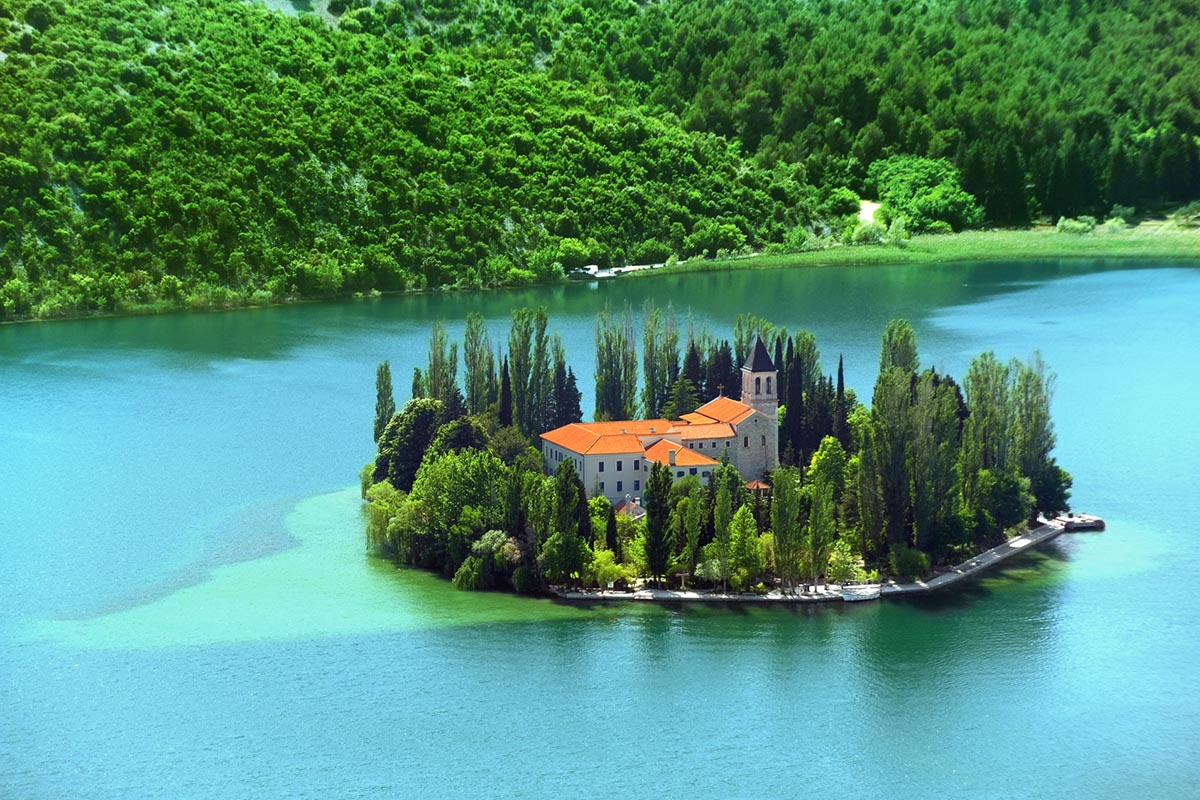 Upon your return from Skradin, be sure to stop in Šibenik. This town was built below the old Croatian fortress St. Mihovil, which still dominates the town’s panorama. The St. Jacob’s Cathedral is yet another impressive building, and was considered a wonder when it was built, from both artistic and constructional point of view. Today, it is part of the UNESCO World Heritage List.

From Šibenik, you sail towards Tribunj. Although it has turned to tourism a long time ago, Tribunj is still a fishing place. Gourmands are well-aware of Tribunj’s fish restaurants. Boats which berth along the town’s waterfront create an atmosphere long-forgotten in most coastal areas. Tribunj is especially known for its wine and olive oil. In autumn, wine barrels decorate the waterfront, and the life of the locals moves to the vineyards and olive groves. The history of Tribunj is closely connected to the building of the church of St. Nicola in the 17th century. There is a beautiful belvedere there today under which is a calm pine forest and Zamalin beach. A bit further, you can visit the natural beaches Sovlja and Bristak. The old part of the town lies on a low islet. There are about a hundred houses crammed together, and the streets between them are so narrow that you cannot even see them at first. During summer, you can enjoy the well-known Tribunj parties: the Fishermen’s Night, the annual donkey race and the angling cup at the end of August. You can berth in a nearby marina where you are protected from all the winds. 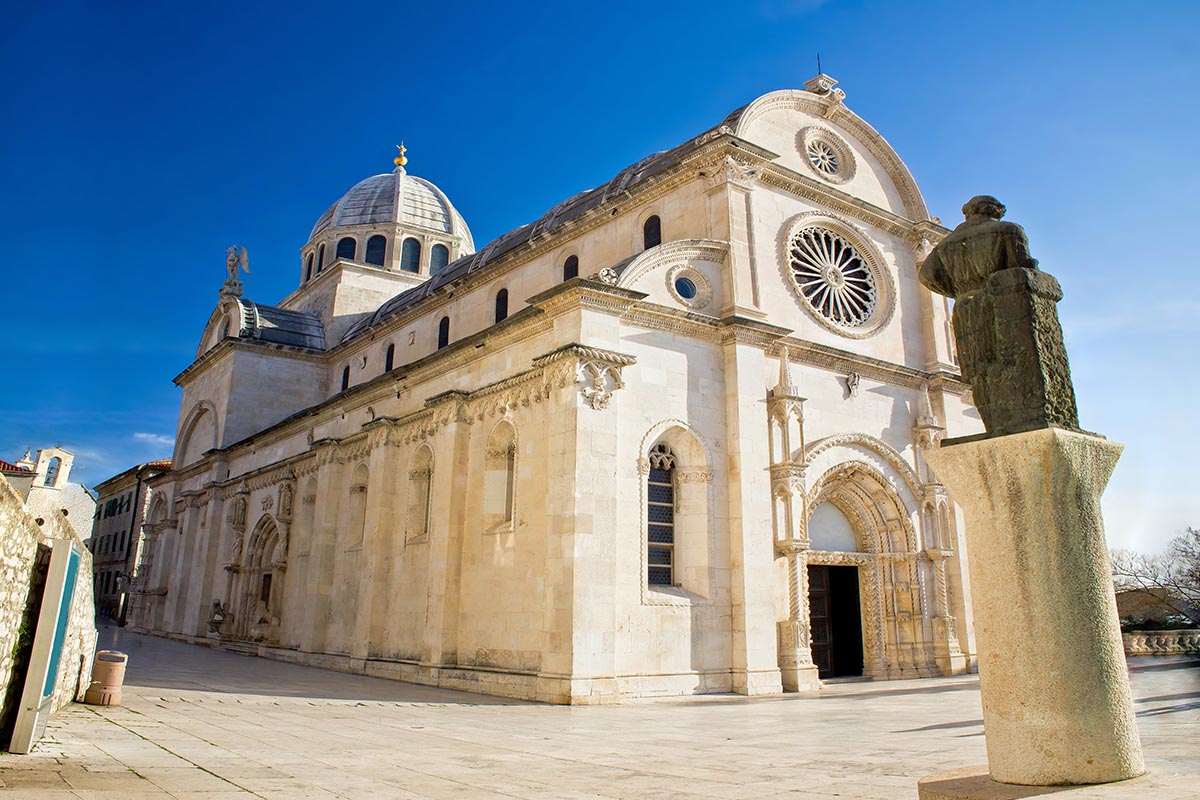 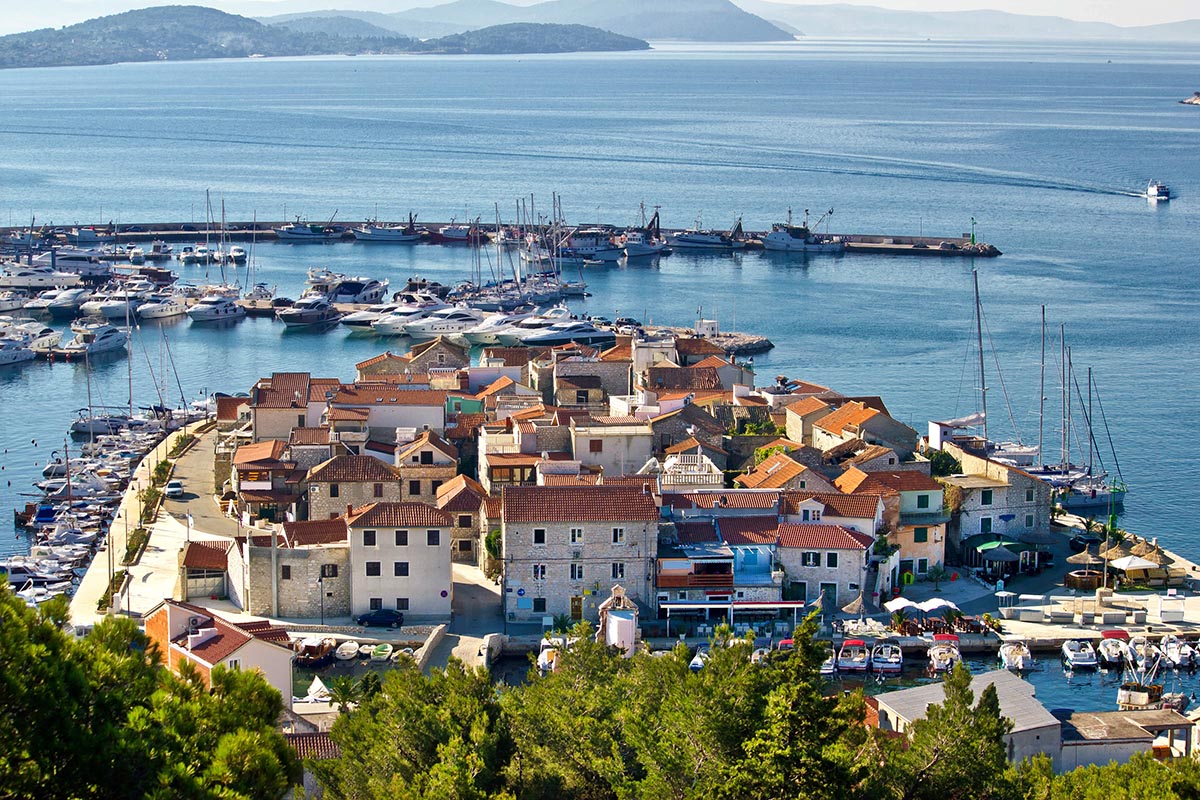 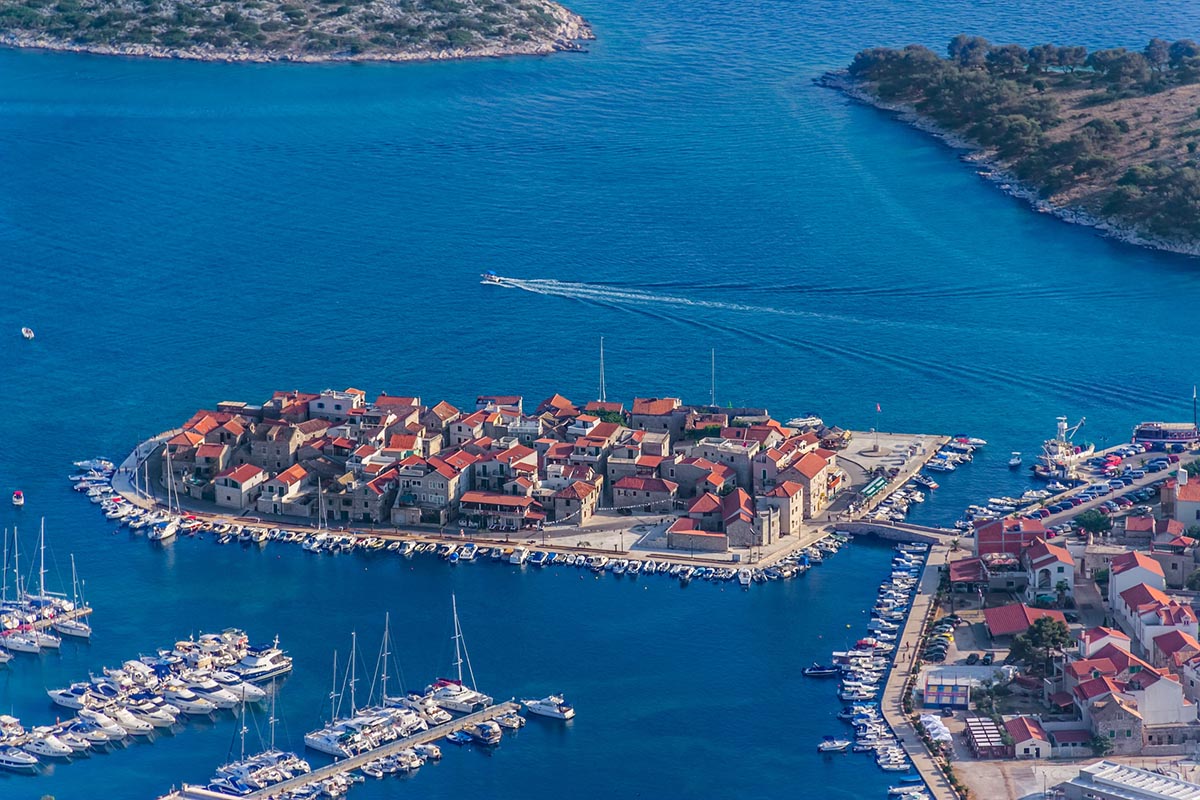 The wind takes you further on towards Primošten, an island whose inhabitants connected it to the mainland five centuries ago, so they could reach their fields in order to cultivate them. The town represents a true harmony of the past and present. The place is dominated by the St. George church from 1485. There are also the churches of St. Rocco from 1680 and Our Lady of Mercy from 1553. Everywhere you turn, there is a certain Mediterranean charm which is hard to resist. Traditional food is spectacular here and it goes well with the well-known Babić red wine, which is made from an indigenous sort that grows in the famous Primošten stone vineyards, paintings of which can be found in the UN headquarters.

You will have a view of the vineyards if you berth in Marina Kremik, which is situated a bit more to the south of the town in the Peleš bay. You can berth in the town as well, but only when the weather is nice and if you arrive during early afternoon, so you can find a free place to berth. You can find a shelter during the night in Marina Kremik or even more to the south in Marina Frapa, next to Rogoznica. If you are looking for a good time, there are parties regularly organized during summer months on Primošten’s streets and squares. You can also dance in one of the biggest disco clubs in the Adriatic, “Aurora”, until the early morning hours. 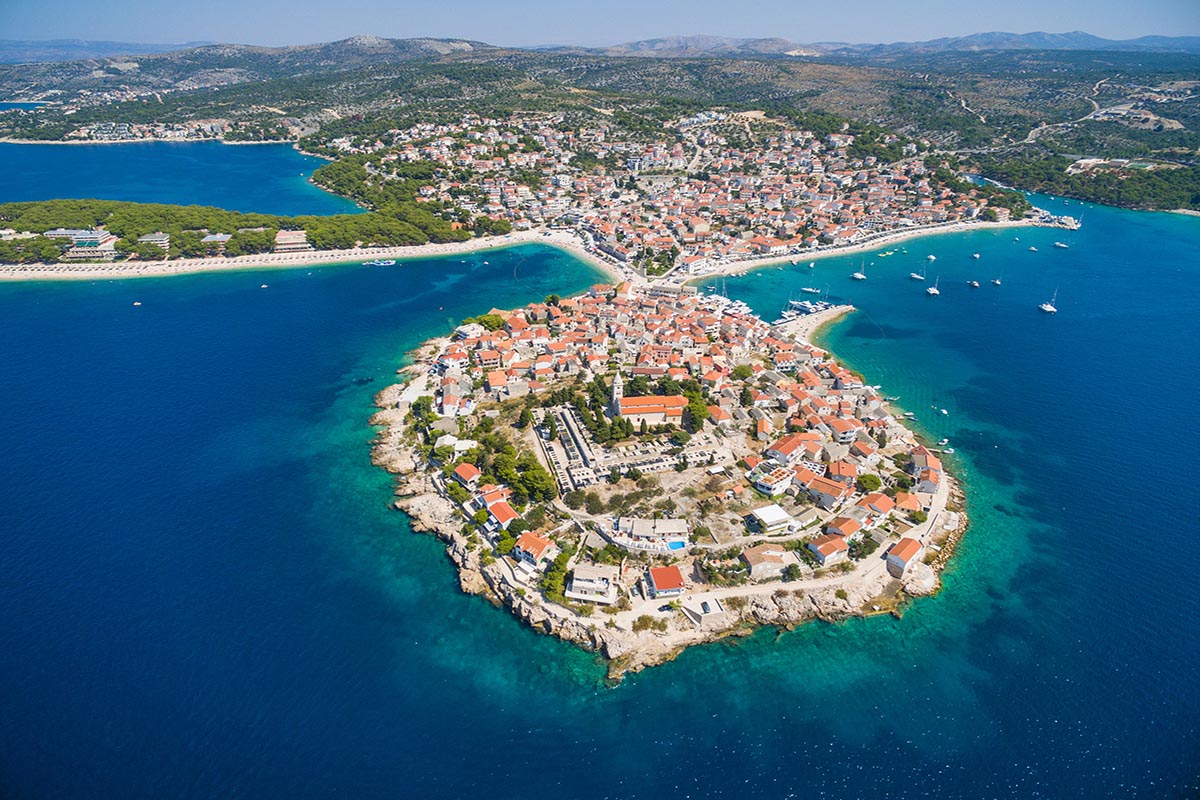 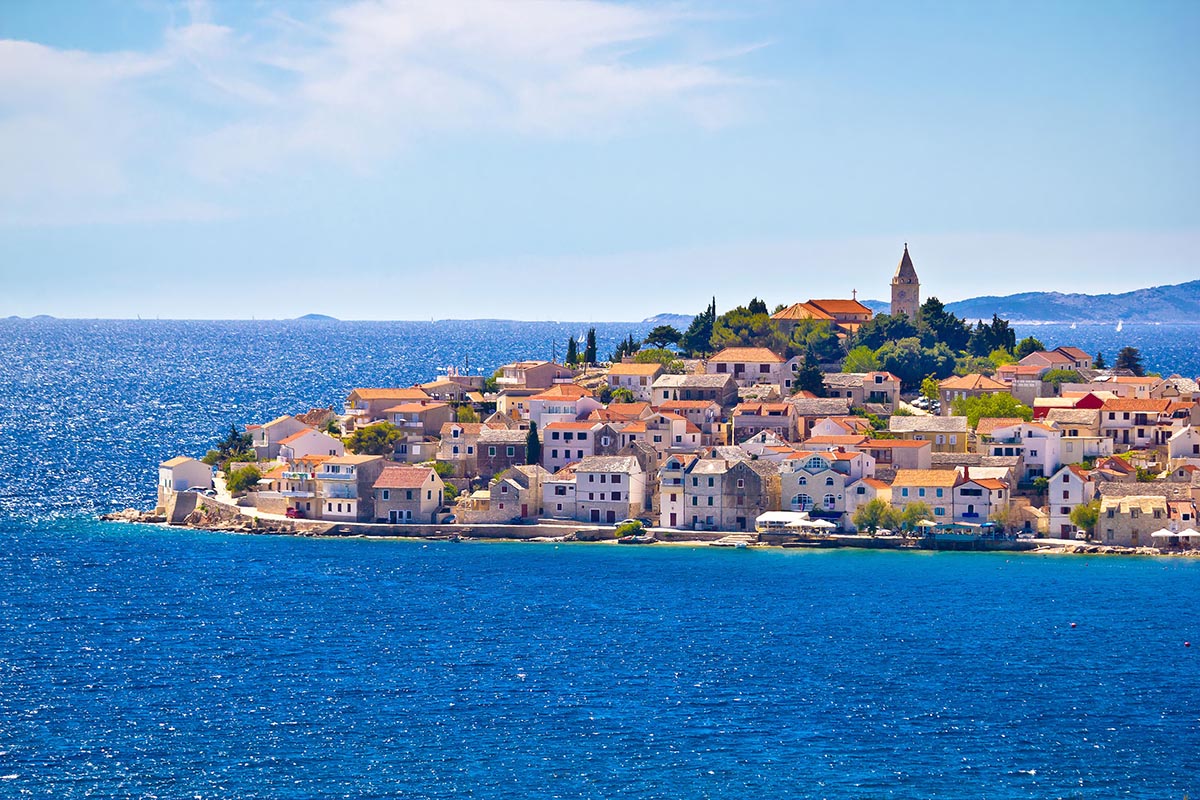 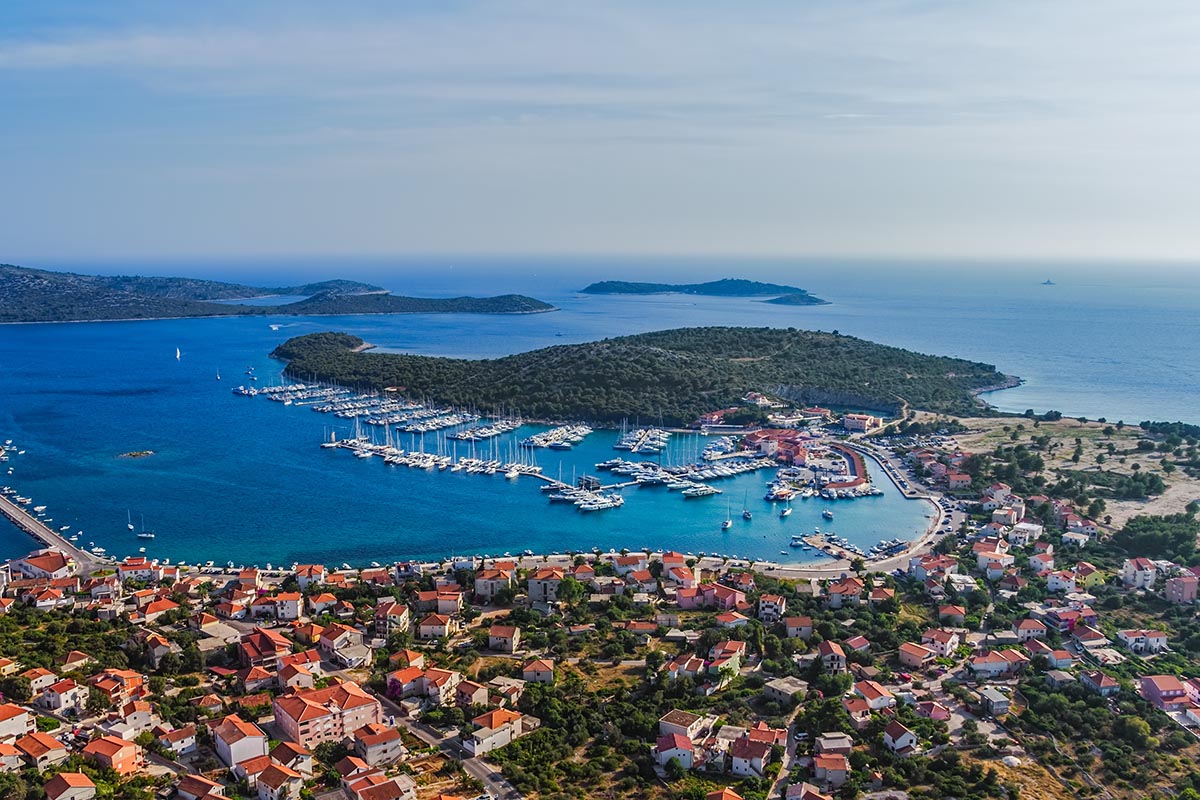 After Primošten, there is another Adriatic pearl waiting for you – Trogir. The safest place to berth your boat is in the marina. After leaving your yacht, stroll down the stone streets of the oldest part of the town, which is completely preserved. Trogir was founded by Greek colonists from the island of Vis in the 3rd century BC. It is the best preserved Romanesque-Gothic town, not only in the Adriatic, but also in the whole of Central Europe.

Trogir’s core from the Middle Ages is surrounded by city walls. It combines a well-preserved castle with a tower and many buildings and palaces from the Romanesque, Gothic, Renaissance and Baroque periods. The most prominent building is Trogir’s Cathedral of St. Lawrence with a west portal door, which is a masterpiece of the sculptor Master Radovan and the most significant example of the Romanesque-Gothic art in Croatia. 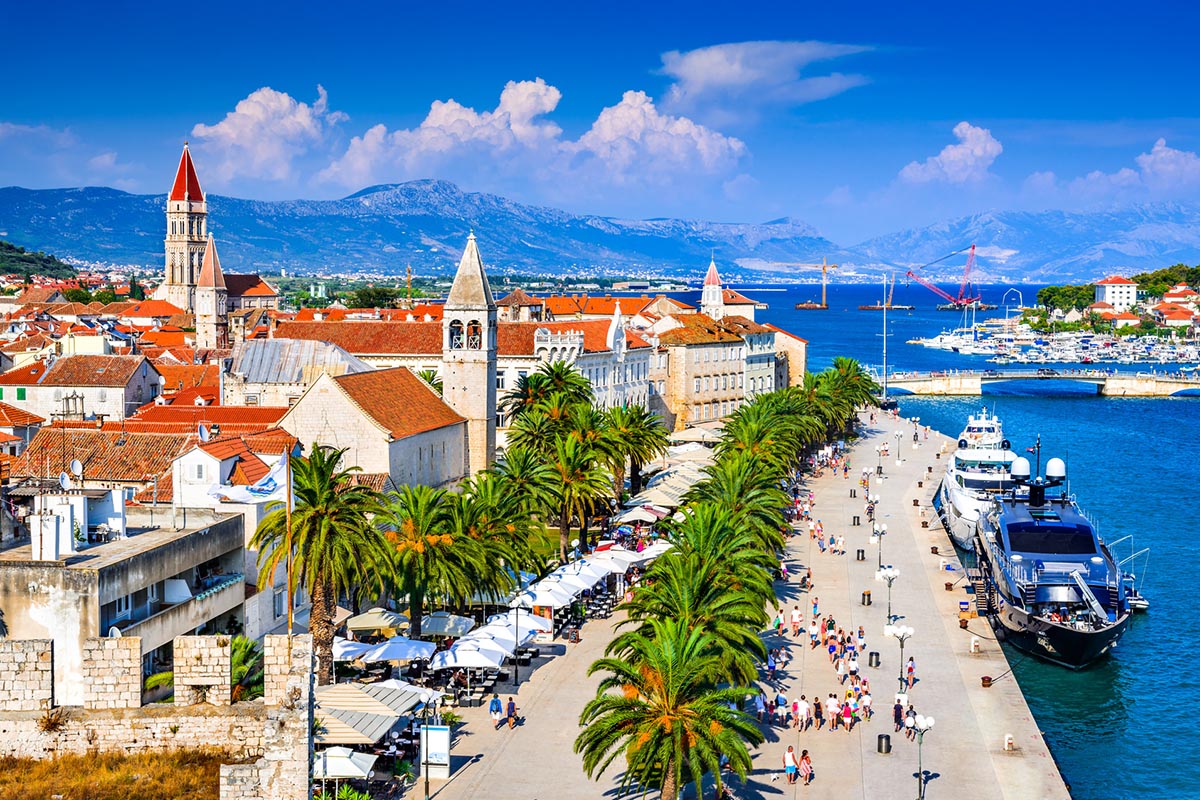 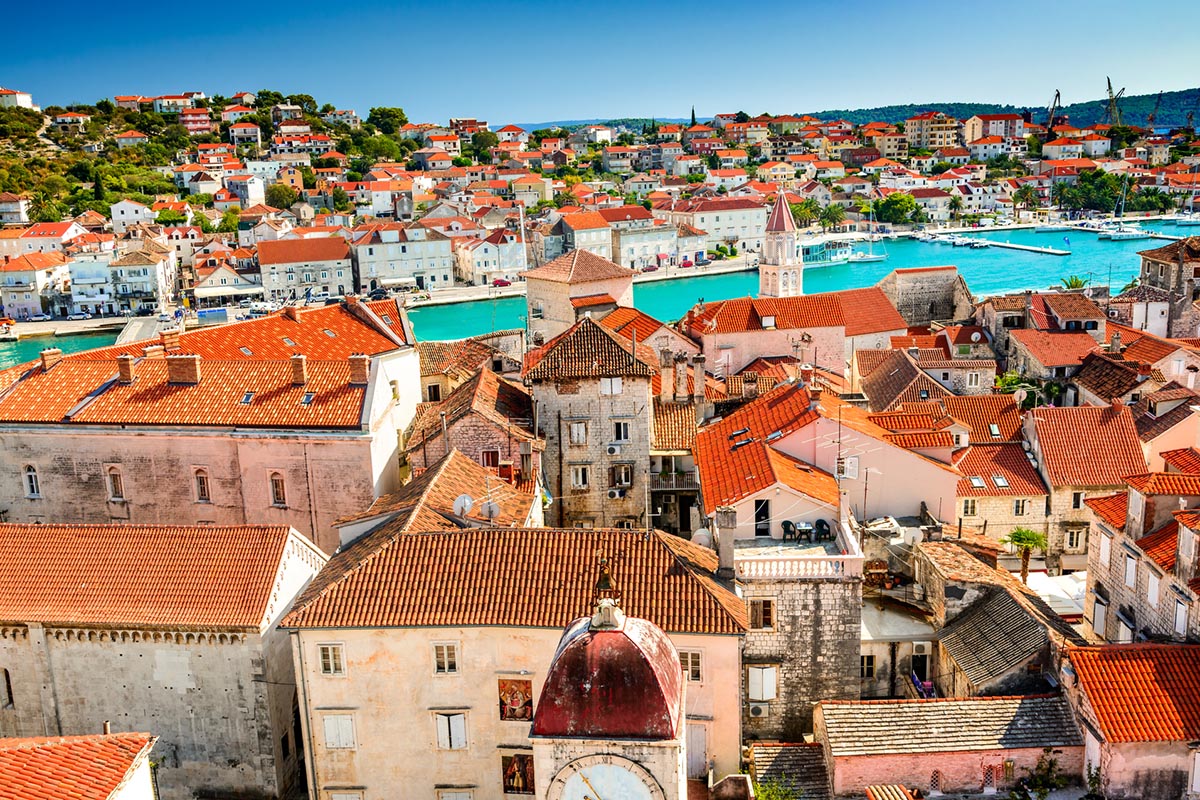 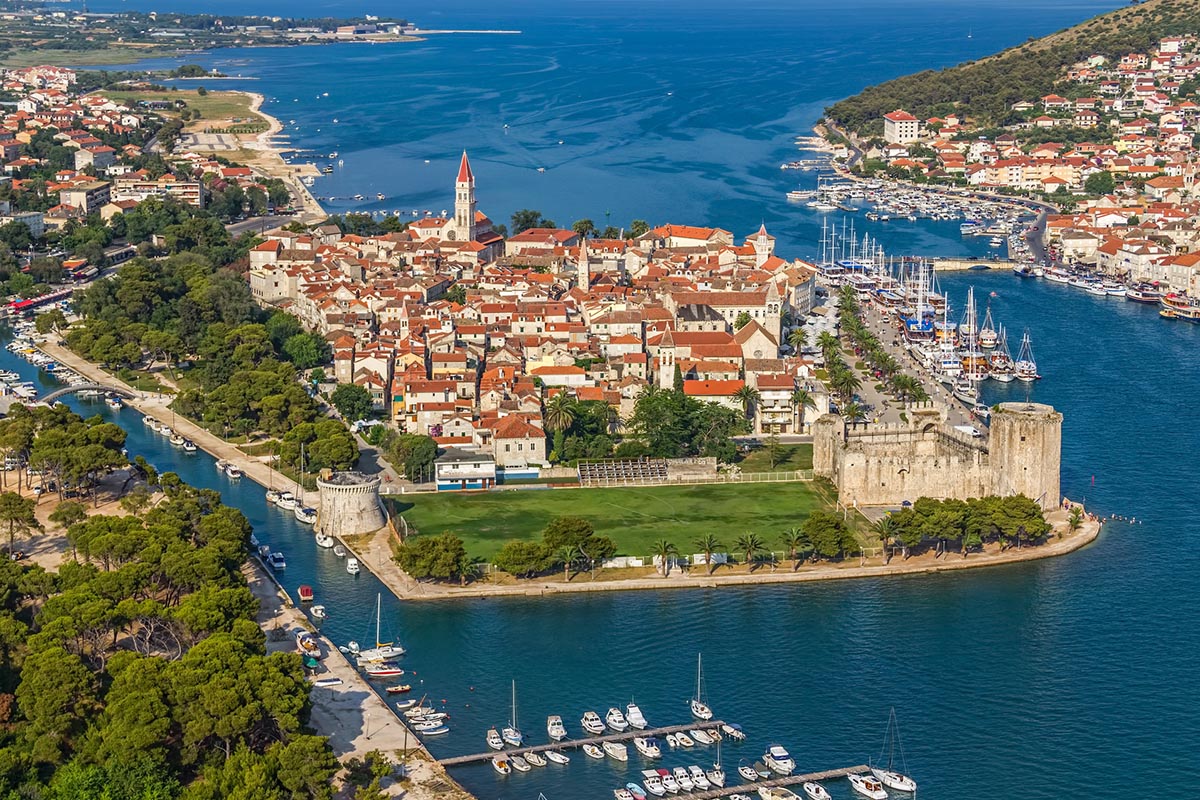 On your last day, sail around Mali and Veliki Drvenik. The north side of Mali Drvenik is barren and inaccessible, but the south side is forested with macchia and pine wood. Although small (3.3 km2), this islet has five hamlets, so you are always able to see some houses from the sea. Veli Drvenik has several bays in which you can berth. We recommend you to berth in the Krknjaši Bay between the east coast of Veli Drvenik and the islet of Krknjaš. There, you can go for a swim, and then sail out towards Rogač, where you will spend the night. 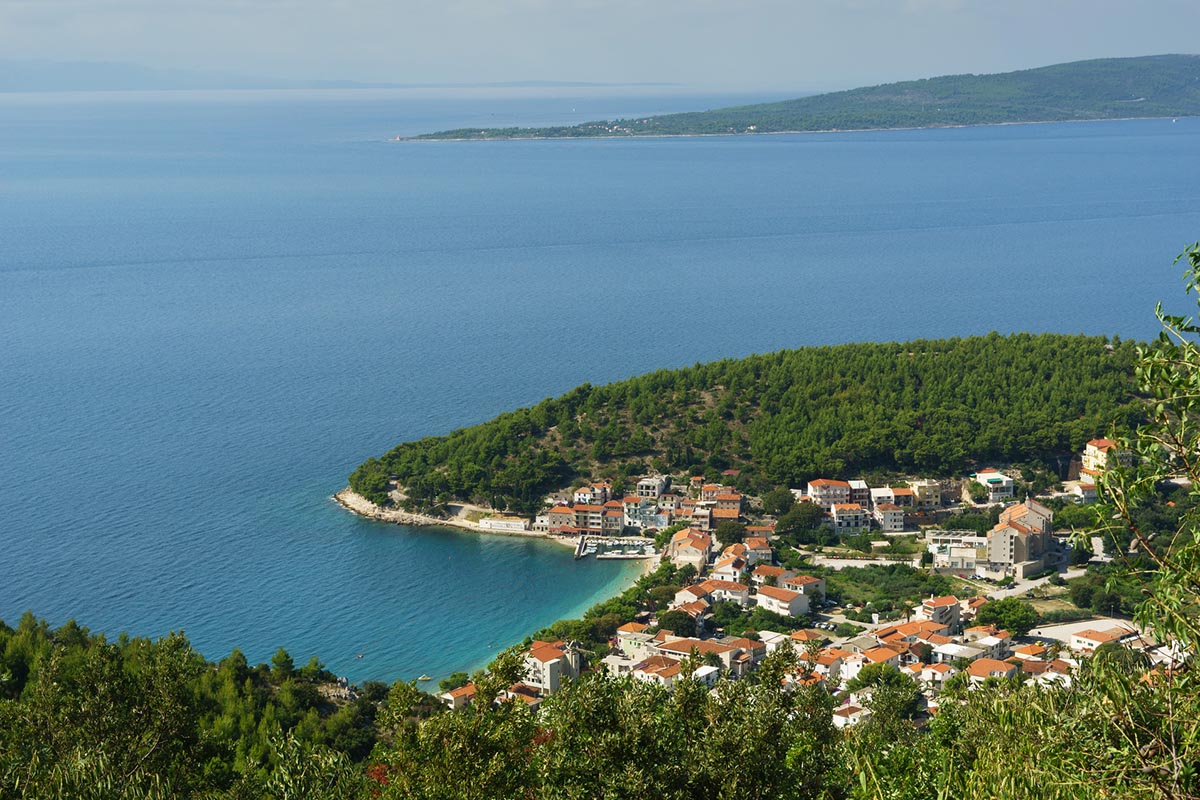 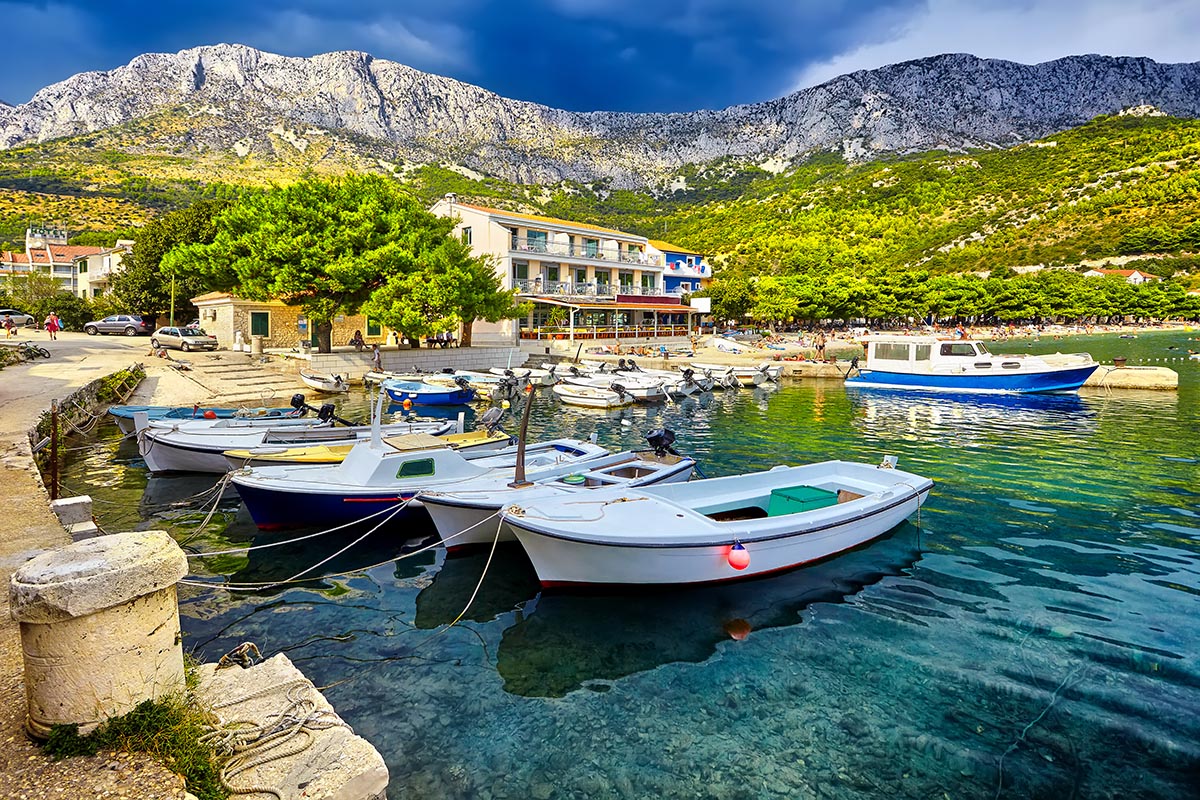 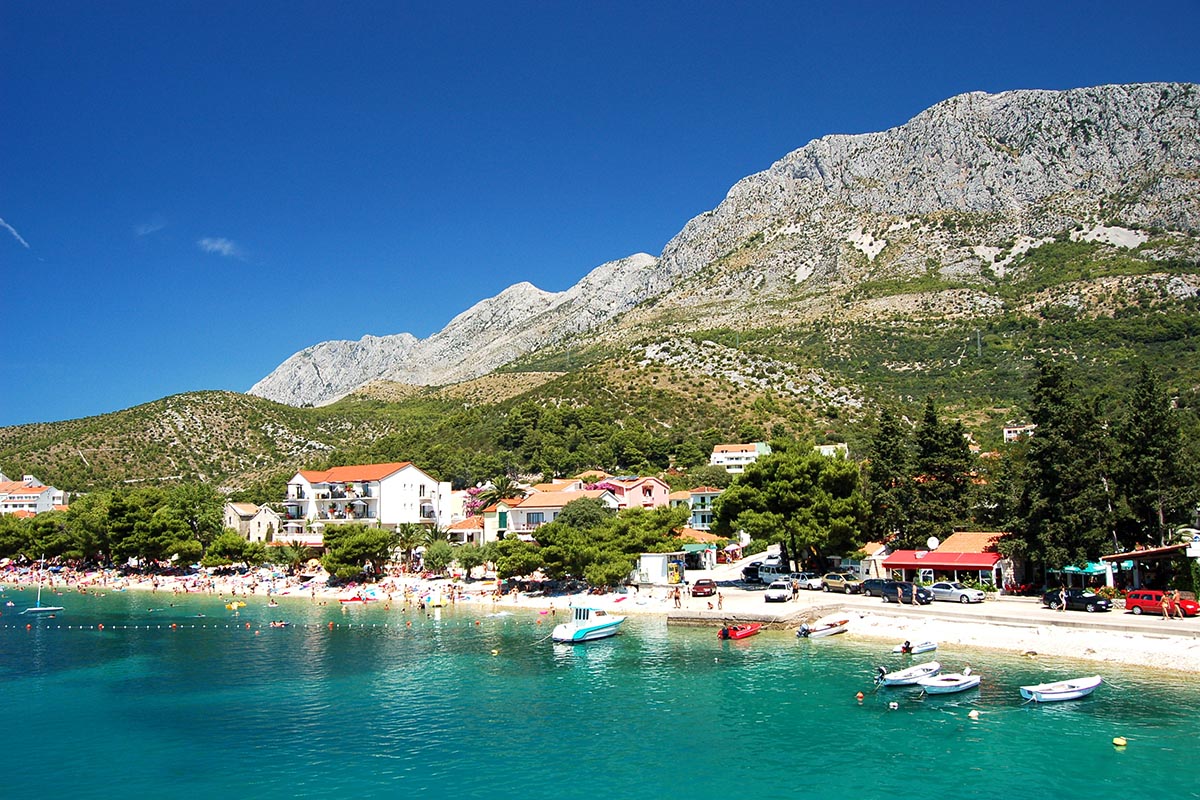